HomeYWCA launches ‘Until Justice Just Is’ campaign
A- A A+ 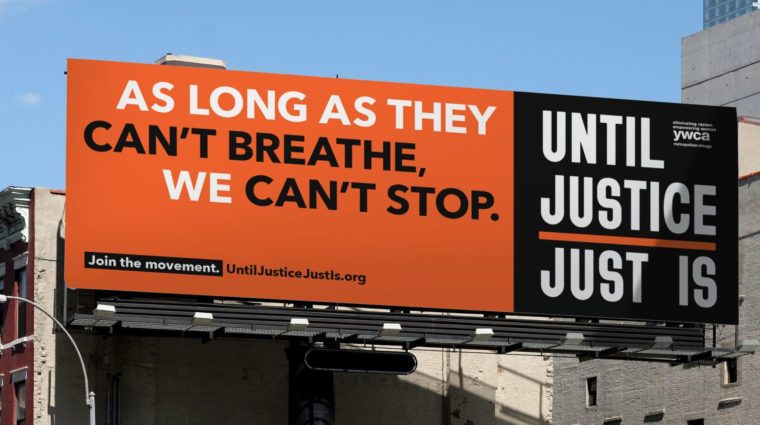 Along with over 200 associations across the country, YWCA Dayton is proud to launch Until Justice Just Is, a campaign designed to bring awareness to the pervasiveness of systemic racism and our commitment to ending systemic and institutional racism.

Against this year’s long-overdue nationwide reckoning with racism, communities, companies, and individuals everywhere are searching for actions they can take to make meaningful progress toward racial equity. Through Until Justice Just Is, YWCA will center the work associations are doing, every day, across the country to offer resources in the fight for equal opportunity and justice for all.

“YWCA has a long legacy of fighting for racial justice, and we’re more motivated than ever to double down on our mission and do the work of justice,” said Alejandra Y. Castillo, CEO of YWCA USA. “But we can’t do this work alone. Dismantling systemic and institutional racism requires a nationwide response. Individuals, companies, and communities everywhere need to take actionable steps towards ending racism, and our goal with this campaign is to offer them a roadmap.

Our communities demand justice in a thousand different ways. This moment in the movement for racial justice isn’t the absolute solution to systemic inequities, but rather a starting point in our foundational push to meet those demands and to elevate and bring about change for women and people of color.”

At YWCA, we lead conversations and set the model for talking to our children about racism, we are making sure that marginalized communities are counted in the Census, we are raising our voices against voter suppression tactics so that people of color have safe and equal access to the ballot box, we are pushing for equal protection under the law and demanding an end to racial profiling and targeted surveillance tactics and strategies, we are teaching women and people of color new skills that lead to better lives for their families, and we are leveling the playing field for those same people to become entrepreneurs.

Earlier this year, YWCA Dayton hosted its third 21-Day Racial Equity and Social Justice Challenge, which saw more than 6,000 participants. The Challenge is designed to give people the space and help them carve out the time to build more effective social justice habits, particularly those dealing with issues of race, power, privilege, and leadership. Participants were prompted daily via email with challenges such as reading an article, listening to a podcast, or reflecting on a personal experience to help them discover how racial and social injustice impacts our community and ways to actively dismantle it.

YWCA also leads an annual Stand Against Racism national campaign during the fourth weekend of April, designed to raise awareness of racial injustices and encourage the public to take a stand for racial equity. Past YWCA Dayton activities have included the Stand Against Racism pledge, rallies, community dialogues, film discussions, and more.

“Eliminating racism. Empowering women. We demand a world of equity and human decency; we envision a world of opportunity; and we commit ourselves to the work of justice. We’re not new to this, we’re true to this,” Castillo said. “We stand on the legacy of women before us, like our very own Dorothy Height, who pushed the boundaries and developed our bold stance against racism known as the One Imperative: ‘the elimination of racism wherever it exists and by any means necessary,’ the driving force behind all YW initiatives.

We will continue to do this work…Until the land of the free is free of racism. Until the home of the brave is brave enough to change. Until ‘by the people’ and ‘for the people’ means doing right by all the people.”

Be On a Mission with us and take the Until Justice Just Is pledge now at https://ywcaisjustice.org.