HomeWinning the leadership lottery
A- A A+ 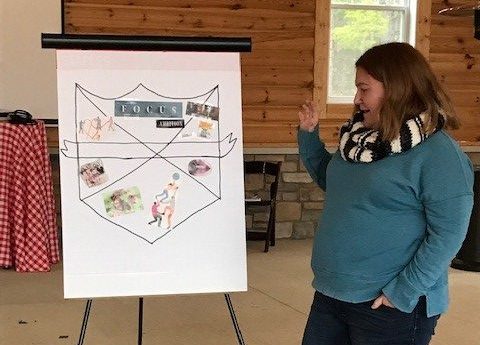 Most lottery winners look forward to receiving a large sum of cash – but for one member of Team YWCA, her winning ticket was priceless.

Miranda Armstead, rural advocate at YWCA Dayton, was the lucky recipient of a special experience, instead of a fortune, when she won a place in this year’s Leadership Preble County cohort. The seat lottery was sponsored by Indiana University East – which also happens to be Armstead’s alma mater.

“When I found out that my name had been randomly chosen to receive a scholarship sponsored by Indiana University East, where I went to school, I thought it was pretty much meant to be,” Armstead said. “I hadn’t been back working in Preble County for that long, so I was very excited to dive right in.”

The seven-month program – hosted by the Preble County Chamber of Commerce – culminates this month and is designed to educate, train, and encourage local Preble County professionals to take a leadership role in their community. From visiting the wastewater treatment plant to touring the county jail, session topics included economic development, genealogy, agriculture, volunteer Board service, infrastructure, public safety, health and human services, and more. The cohort also spent a day in Ohio’s state capital, touring the Supreme Court and meeting with Gov. Mike DeWine.

“I was anticipating meeting new people and learning about new happenings, but didn’t really expect to learn much that I didn’t already know – I have lived in Preble County my whole life. But, I was wrong; I learned so much,” Armstead said.

The program began with a retreat that helped participants identify their leadership styles and ways they can use that knowledge to become better leaders and set annual professional goals.

“Since starting this program, I have reached the goal I set for myself to join a board and expand my volunteering. Now, I’m a proud member of the Preble County Mental Health and Recovery Board and am serving as chair of the steering committee for Preble Connect, a local group aimed at engaging Young Professionals in our county.”

For mission-driven nonprofits like YWCA Dayton, being able to connect staff with premiere training opportunities, at little to no cost, is incredibly valuable. As Armstead points out, her presence in Leadership Preble County also allowed for increased awareness of YWCA Dayton’s Preble County Office and generated new partner connections. Thanks to this experience, YW’s Sexual Assault Response Team (SART) has a new member from Kettering Health’s Preble County Emergency Department, providing a critical medical perspective when crafting crisis care for rural survivors of abuse.

“We want as much of our funds and generous contributions to go to our frontlines, to the community, as possible,” explained Courtney Griffith, director of rural strategy. “At the same time, we are committed to building a team that is well-trained and able to offer the highest quality care to the women and families we serve. We want to grow and empower our staff just as we help our clients to be empowered.”

Armstead was also left with a newfound appreciation for her hometown.

“Preble County is a great place to work and live,” she said. “There are so many things to do here for fun if you look for it. I can remember when the majority of entertainment was in Eaton, and even then it was slim. Now we have our smaller communities, like Lewisburg and Camden, really coming to life. I would encourage anyone who has not visited Preble County recently to do so. They won’t be disappointed.”