HomeWhat We DoWomen & Girls LeadershipSojourn Leadership Academy
A- A A+

YWCA Dayton Sojourners are a dynamic group of young professional women nominated by members of the YWCA Dayton Circle of Influence or Board of Directors in recognition of their leadership qualities and potential to become community influencers.

Our girls can’t be what they can’t see; when they look at our board rooms and corner offices, are they met with a mirror or a closed door? Following an intensive, mission-driven nine-month program, our Sojourners graduate uniquely prepared to serve on nonprofit boards, be educated advocates for social justice, and act as equity leaders in the Miami Valley.

The Academy curriculum is rooted in three core pillars:

Vision
A community led by equality and empathy.

Purpose
To grow women’s leadership for equity, civic, and social justice in the Miami Valley region. 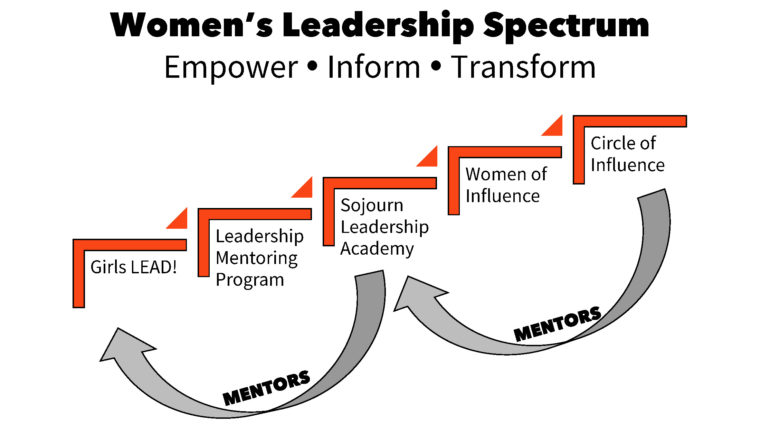 YWCA is the world’s oldest and largest multicultural organization for women. Since 1870, YWCA Dayton has been a convener of women’s voices — lifting up their needs, triumphs, and challenges so that together, we all rise. This legacy of leadership and commitment to intersectionality are core tenets of our Sojourn Leadership Academy. Sojourners:

Tell me more about the Academy's focus on racial justice, gender justice, and economic empowerment.
more

At its core, YWCA advocates for an end to discrimination against women in every sphere — economic, political, and social. YWCA’s approach goes beyond changing hearts and minds. We strive to transform communities, systems, and public policies. YW believes that change happens at the local level, so YWCA Dayton is committed to equipping our region’s leaders with the information and experiences they need to recognize when marginalized voices are absent — and then are leaders who use their privilege to ensure marginalized voices get heard.

Why is it named Sojourn?
more

Sojourner Truth (born Isabella “Belle” Baumfree circa 1797) was an African-American abolitionist and women’s rights activist. Born into slavery in New York, she escaped with her infant daughter to freedom in 1826 and regained custody of her son in 1828, making her the first black woman to win such a case against a white man.

She took the name Sojourner Truth in 1843 after feeling called by her faith to leave the city for rural areas, “testifying the hope that was in her.” Her best-known speech was delivered extemporaneously, in 1851, at the Ohio Women’s Rights Convention in Akron, becoming widely known as “Ain’t I a Woman?.” In 2014, Truth was included in Smithsonian magazine’s list of the “100 Most Significant Americans of All Time”.

Sojourner Truth believed her talent for influencing others through education and inspiration needed to be used to uplift those communities most often marginalized: often, women, and especially women of color. She understood what bondage, and poverty, and lack, looked and felt like for these populations.

Thus, Sojourn Leadership Academy takes its names from this legacy and invites participants to pause — to stop, temporarily — and focus on the ways in which the power they have now, and the influence they will acquire, can be leveraged to empower those same communities today in the 21st century.

How do I apply?
more

Sojourn Leadership Academy nominations may only be submitted by members of YWCA Dayton’s Circle of Influence or Board of Directors. Members may each submit up to three (3) young women, age 25-40, for consideration each year; once submitted, YWCA Dayton notifies the nominee and, if she would like to be considered, invites her to apply to join the program. Finalists for each year’s class are selected by the all-volunteer Advocacy Committee. Nominees cannot be currently serving on the YWCA Dayton Board of Directors or employed by YWCA Dayton, including contract work. Diverse candidates are welcomed and encouraged.

What is the criteria?
more

Nominees for Sojourn Leadership Academy should:

I'm interested in joining Sojourn, but I need someone to nominate me.
more

You can find a list of our Circle of Influence members HERE and our current Board of Directors HERE.

What is the application timeline?
more

Typically, nominations are due by the first Friday in January; applications are due by the first Friday in February. However, nominations can also be accepted on a rolling basis. If you feel the nomination period has closed, but have someone to nominate, please check with us at sojourn@ywcadayton.org to see if nominations for this year are still in review. Class selections are finalized and Sojourners notified by mid-February. The class is announced publicly at the Women of Influence awards luncheon, held the second Thursday in March.

When & where does it meet?
more

Sojourn Leadership Academy is an intensive leadership program that meets monthly over the course of nine months, from April through December of each year. Sessions are held on the first Wednesday of the month from 8 a.m.-2 p.m. at locations in the greater Dayton area. A light breakfast, lunch, and snacks are provided at each session, along with all program materials.

How much does it cost?
more

Tuition for Sojourn Leadership Academy is $1,500 and is due in full one month prior to a cohort’s opening session. Tuition covers all meals, excursions, speakers, and program materials and is nonrefundable after the program’s first session. If extenuating circumstances necessitate program withdrawal, refunds (either partial or in full) will be considered by YWCA Dayton leadership on a case-by-case basis, but are not guaranteed.

Thanks to the generosity of community partners, we are pleased to offer a limited number of full and partial Academy scholarships each year. Scholarship Request Forms are made available to nominees during the application process and awards are granted at the discretion of the Sojourn Committee.

I’ve been selected for the Sojourn Leadership Academy! What is required of me?
more

In order to complete the Sojourn Leadership Academy program and fully realize all of its benefits, we ask that participants:

I have more questions.
more