HomeSenate Bill 162 Testimony
A- A A+ 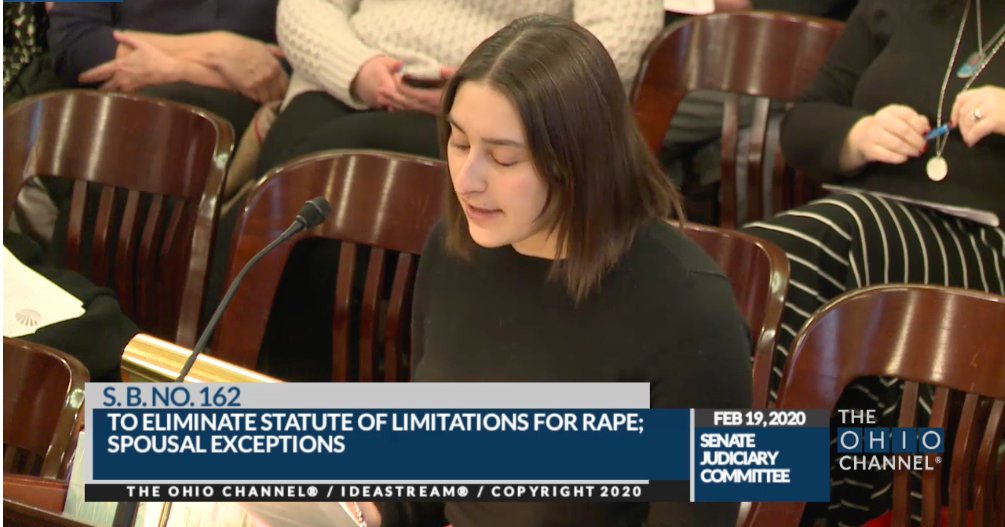 YWCA Dayton Advocacy Manager Sarah Wolf-Knight delivered the following testimony to the Senate Judiciary Committee in support of Senate Bill 162 during its hearing on Feb. 19, 2020. SB 162 would eliminate Ohio’s spousal exemption for sex offenses and the statute of limitations on rape.

Thank you for the opportunity to provide proponent testimony on Senate Bill 162, which would eliminate Ohio’s spousal exemption for sex offenses and the statute of limitations on rape.

Today, I stand before you on behalf of YWCA Dayton to ask that you pass this important piece of legislation to stand up for survivors of sexual violence across the state of Ohio. As an organization that has been on a mission to eliminate racism, empower women, and promote peace, justice, freedom, and dignity for 150 years, YWCA Dayton is taking a stand on behalf of all Ohio women to modernize state law and allow survivors the dignity of justice. At YWCA, we know that not all violence is acknowledged or responded to equally and that some victims go unrecognized altogether.

SB 162 would eliminate all exceptions to sex offenses that currently apply if the person subjected to the prohibited conduct is the offender’s spouse, including under rape, sexual battery, unlawful sexual conduct with a minor, gross sexual imposition, and sexual imposition.

Until the 1970s, rape or sexual assault within a marriage was not recognized as a form of abuse, as women were still often viewed as a piece of their husband’s property, and their consent was implied. Although our understanding of consent has evolved, evidence indicates that marital sexual abuse is still taken less seriously then other forms of sexual abuse, and these beliefs are still reflected in Ohio’s current rape and sexual assault statutes. Multiple studies have found that a significant number of participants still question whether it is possible to rape one’s wife; a study of college students found that marital rape was perceived as less serious than rape perpetuated by a stranger, and just half of male students thought that it was possible for a husband to rape his wife. We do not want these misconceptions perpetuated by our state’s laws.

Statistics show that marital rape is both more prevalent and more damaging than existing statutes acknowledge. A 1990 study found that more than one in every seven women who have ever been married has been raped in a marriage.  A more recent national study found that 34% of women indicated that they had unwanted sex with their partner, and this number continues to rise when other elements of domestic violence are considered.

As the only domestic violence shelter serving Montgomery and Preble counties, YWCA Dayton is part of the largest network of domestic violence service providers in the country. We are committed to supporting survivors and reducing violence against women and girls. Women who are involved in physically abusive relationships are especially vulnerable to rape by their partners. Like other forms of domestic violence, marital rape is about power and control. A recent study by the National Institute of Justice found that 2/3 of women who had been physically assaulted by their partner had also been sexually assaulted.  Studies using clinical samples of abused women reveal that up to 70% had been sexually assaulted by their partners. Women who are raped by their husbands are also likely to be raped multiple times: almost 80% of women who had experienced sexual assault in marriage also reported repeated incidents of forced sex.

Women should be empowered to utilize the correct language when it comes to consent, and our legal code needs to identify sexual abuse for what it is: unwanted sex without active consent is always rape. No marriage license or show of force changes the definition of the act. The myth that the absence of physical injuries or resistance on the part of the victim indicates consent is particularly damaging in the context of intimate-partner sexual assault. Victims of intimate-partner sexual violence often choose coping or survival strategies that appease the abuser, rather than fighting unwanted sexual advances, to avoid physical, emotional, or financial consequences. This is particularly prevalent in marriages where women are victimized by other forms of domestic violence, as there often does not need to be an explicit threat of force for a victim to feel like she can’t say no. A woman may believe that if she resisted, she could be hurt more severely, that resistance would prolong the assault, that appeasement would protect her children, that unless she was ready to leave, she would have to face the perpetrator again, that she should “keep the peace,” or that she was somehow deserving of the assault. It is also common for victims in these situations to struggle to identify the act as rape.

Senate Bill 162 empowers survivors with the language and the legal options to face marital sexual abuse. The passage of this legislation will allow Ohio to overcome harmful and antiquated norms regarding a woman’s ownership of her own body and allow married survivors to have the same protections from sexual assault as unmarried ones. Ohio is one of only eight states with an exemption that treats certain encounters between spouses differently than if two people were unmarried.

As with marital rape, Ohio is lagging behind the more than half of the other states who have already eliminated the statute of limitations for rape, an arbitrary length of time during which a victim is able to report their rape and receive justice. By passing Senate Bill 162, the legislature would join in eliminating this barrier to justice and ensuring that rapists never evade legal consequences simply because an arbitrary time limit has expired.

One in five women will be raped at some point in their life. Even with the alarming prevalence of sexual assaults, the trauma of sexual violence remains a source of shame and guilt for those who survive. As the only Rape Crisis Center serving Montgomery and Preble Counties, YWCA Dayton understands how the physical, emotional, and psychological effects of sexual violence can influence how and when a victim reports a crime.

“The statute of limitations for rape has historically served to balance maintaining the public’s safety while protecting defendants’ rights in the criminal justice process. However, with a society that has recently begun to dissect the stigma, shame, intimidation, and trauma that often keeps survivors from coming forward, the statute of limitations is another unnecessary hurdle through an already arduous legal process. Eliminating the statute of limitations for rape is a clear message to every rape and sexual assault survivor that they have a voice and no matter how much time has passed until they are finally ready, their justice is important.” ~Megan Garrison, YWCA Sexual Assault Educator

Senate Bill 162 is a critical piece of legislation that empowers survivors by allowing them to speak their truths and be heard. Every day, YWCA supports, serves, and stands alongside survivors. It’s time our state did the same.

Thank you for the opportunity to present testimony on this important issue.