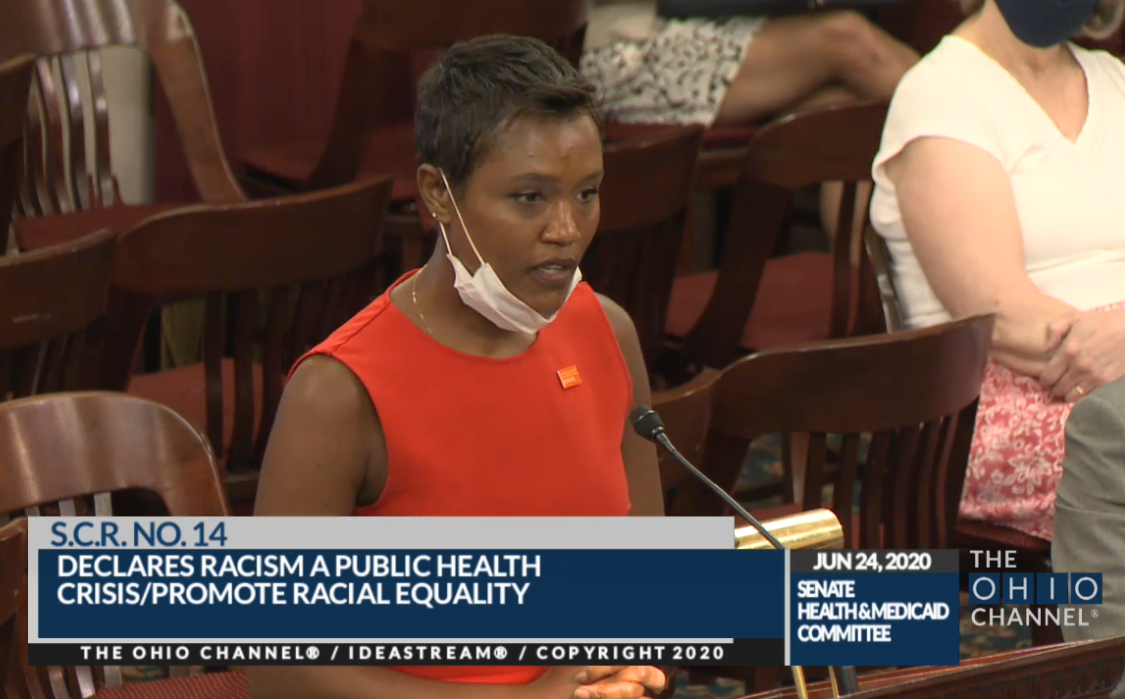 YWCA Dayton delivered the following testimony to the Ohio Senate Health, Human Services and Medicaid Committee in support of S.C.R. 14 during its second hearing on June 24, 2020. S.C.R. 14 would declare racism a public health crisis in the State of Ohio. Watch the hearing recording HERE or at the bottom of this post.

Chair Burke, Vice Chair Huffman, Ranking Member Antonio, and members of the Senate Health, Human Services and Medicaid Committee, thank you for the opportunity to provide proponent testimony on Senate Concurrent Resolution (SCR) 14, which long overdue, would declare that racism is a public health crisis in the state of Ohio, making ours the first state in the nation to do this; and appropriately so, we should be.

My name is Shannon Isom, President and CEO of YWCA Dayton and President of the Ohio Council of YWCAs, representing the 14 Ohio YWCA associations. YWCA is driven by a mission to eliminate racism, empower women, and promote peace, justice, freedom, and dignity for all, and serves the largest constituency of women across the state. YWCA has been at the forefront of the most pressing social movements for more than 160 years — from voting rights to civil rights, from affordable housing to pay equity, from violence prevention to health care reform. Today, we combine programming and advocacy to generate institutional change in three areas: racial justice and civil rights, empowerment and economic advancement of women and girls, and health and safety of women and girls. We’ve been waiting on you; we’re glad you’re here. We have room for you.

Hundreds of years of marginalization that started with slavery, and continues with racism and discrimination, in this country have compounded to deliver poor health and economic outcomes for Black people — heart disease, diabetes, and poverty— that are being magnified under the lens of the current Coronavirus pandemic. This legacy of racism has also led communities of color to have less trust in institutions like the public health system, leading to even poorer health outcomes. In Ohio, the highest excess death rates exist for African Americans and Native Americans at every stage in the life course, and our infant mortality rate for infants of non-Hispanic Black women is the eighth highest in the nation.

It is well-known in the public health field that social determinants of health have an outsized influence on health outcomes. Because our nation’s legacy of discrimination and preserved structural racism perpetuates racial disparities, actions must be targeted to address the specific needs of communities of color as we fight for better health outcomes.

For YWCA Dayton, an organization dedicated to thrust our collective power towards the elimination of racism, wherever it exists, by any means necessary, we believe that declaring racism as a public health crisis is the long-term policy response that can outlast this particular moment, redress the wrongs of the past, and shepherd us into a healthier, more equitable future.

When our own from Dayton Sen. Peggy Lehner asked what we can do to make our General Assembly more equitable, I would say we could have within this also a resounding collective voice from the Assembly to say that this is not a Black people problem; that this within our state, our country, this is a white people problem. That, in itself, would make the space more equitable.

As I pause, and to conclude, and I’ve struggled with this, to say a personal story: I was born to parents that at any particulate point as teenagers could be written off. They worked hard and instilled in me a lot of energy to do more, and to do better; and I have walked that straight line. My mom very quickly moved after she received her degree to Cleveland, where I grew up in North Olmstead, and graduated from North Olmstead High School, and my brother and sister graduated from Strongsville High School, which is in Cleveland. Being one of only three Black people in my high school graduating class, it was difficult, but, I had all access and resources to every single, solitary course that I needed to move forward. I went to a national school of excellence. I was on every committee, not only at school but at church. I did it.

And yet, last summer, when my 19-year-old daughter was driving from Strongsville, Ohio, visiting our family, coming back to Dayton, coming home, she was stopped. And she remembered all the things I have told my son, who is just 16, but have told him for years, on how to stay alive, just in case. And when she was stopped and could not convince, did not understand, why she was stopped in Springfield, Ohio — almost home — that she decided to call me because she heard me tell my son that if he ever gets stopped, call me. Just have me on the phone, so I can know where you are. So I can listen, just in case. So she called me, and she said, “Mom. I just need you to listen, just in case.” And for the first time, I realized, that the fear, and the generations of tears and scares that we have for our baby boys, I have for my daughter. She was just 30 minutes from me and I realized that not only do I have the fear, but I put it in her. That has to stop.

I’ve done it all “right.” I’m in the “right” class, I’m invited to the “right” things, I know how to “speak well,” I am “palatable.” And I am nothing besides a Black mother who has Black children, and I share in the shared experience that we are fearful that not only can our babies dies faster within us, but they can die faster outside of us. That has to stop.

Our bodies can no longer walk around and pretend that we don’t manifest our fear and anxiety, that we don’t have any power over what happens to our families and our children; we have the power to change that. That has to be addressed, and I don’t think you need any more research, or numbers, or Black people telling you this has to stop.

I stand collectively, both personally and professionally, in alignment with our mission of YWCA Dayton that requests that you support the passage of Senate Concurrent Resolution 14 to declare racism as a public health crisis in Ohio to accept responsibility for the government’s role in creating oppressive systems that marginalize Black and brown Americans, and proactively work to create a more equitable community for all our residents, for all of us that live here. Thank you.