HomeRecognizing 62 years of volunteerism
A- A A+ 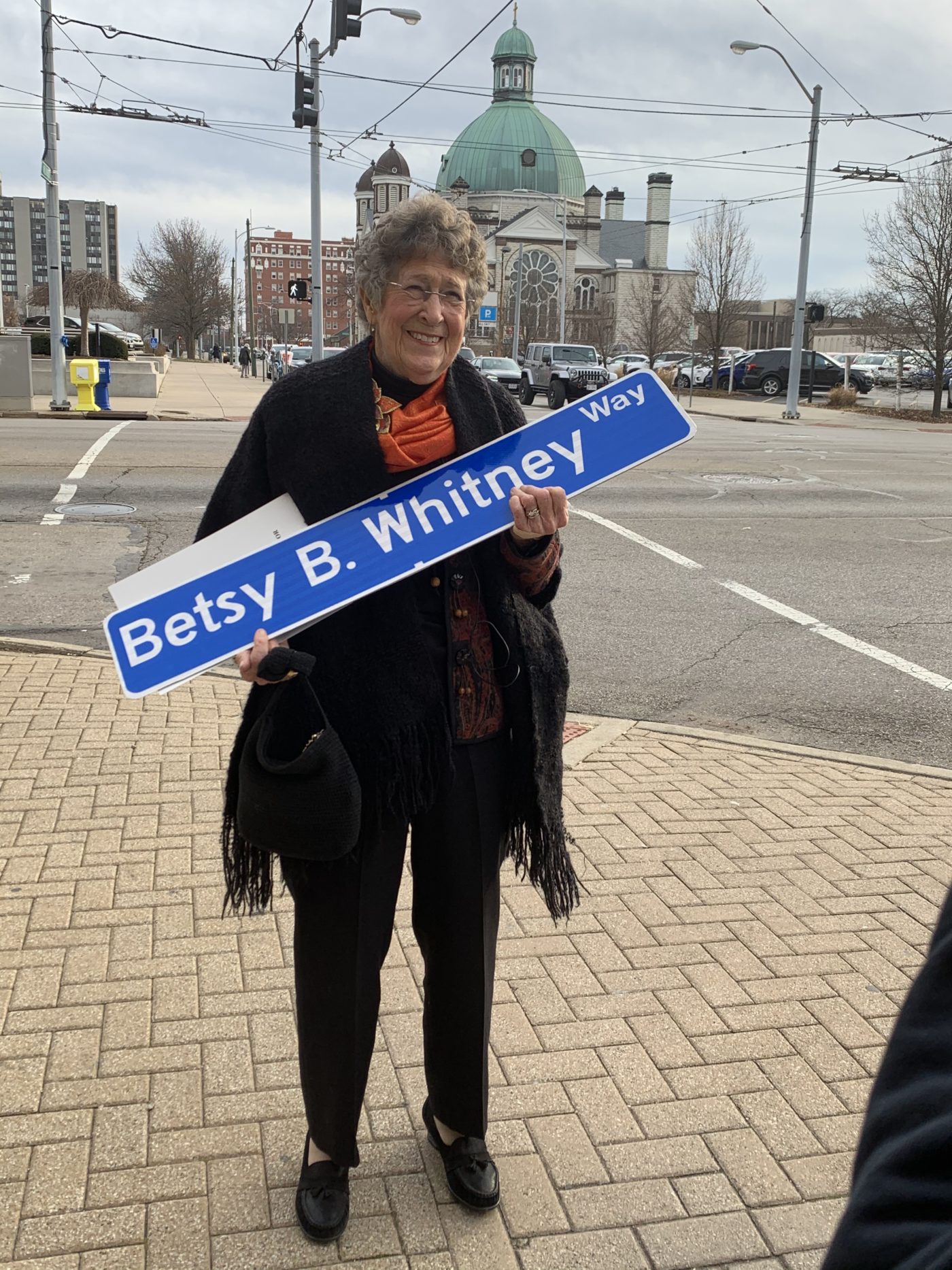 YWCA Dayton recognized its longest-serving volunteer, Mrs. Betsy B. Whitney, with an honorary street designation during a reception and unveiling ceremony on Thursday, Dec. 12, 2019. As approved by the City of Dayton Commission, North Wilkinson Street (from West Third to West First streets) will now be known also as Betsy B. Whitney Way. This location is significant as it touches both YWCA Dayton’s central building and Westminster Presbyterian Church (at 125 N. Wilkinson St.); Whitney has been a longtime parishioner of the church, which in 2001 received YW’s Women of Influence Lifetime Achievement Award. It is one of only four organizations to have received that honor.

Whitney’s contributions to YWCA Dayton, and the greater Dayton community, are unparalleled. She first volunteered at YWCA Dayton in 1957 – “It was my first volunteer opportunity after moving to Dayton,” she has said – and joined its Board of Directors in 1969. She has served in that role continuously for 50 years and is YW’s longest-serving volunteer, having devoted more than 80,000 hours of service.

“Truly, Betsy is an icon in the lifeblood of YWCA Dayton,” said Shannon Isom, president and CEO. “Because of her leadership, we were the second YWCA in the country to open a shelter for battered women – today, YWCA is the single largest provider of domestic violence shelters and services nationwide. Because of her tenacity, our Salute to Career Women was born – an awards program that is now Women of Influence, the largest nonprofit luncheon in the Miami Valley. And because of her philanthropic support, generations of women and girls have always – and will continue to – know our central building as a refuge of safety and love.”

“How do you honor an icon whose name is synonymous with our mission? You make sure they can both be seen simultaneously,” Isom said. “The corner of West Third and North Wilkinson has been our home for 106 years. For more than half of those years, Betsy Whitney has been our sounding board, our trailblazer, our unfailing champion, and an uplifting force for gender and racial equality across Dayton. It is now our turn to lift her name accordingly.”

Mrs. Whitney was also presented with an official City of Dayton proclamation, declaring her birthday — December 15 — as Betsy Whitney Day. “This is by far the best birthday gift I’ve ever received,” she said.