HomePresident & CEO Shannon Isom’s Annual Meeting address
A- A A+ 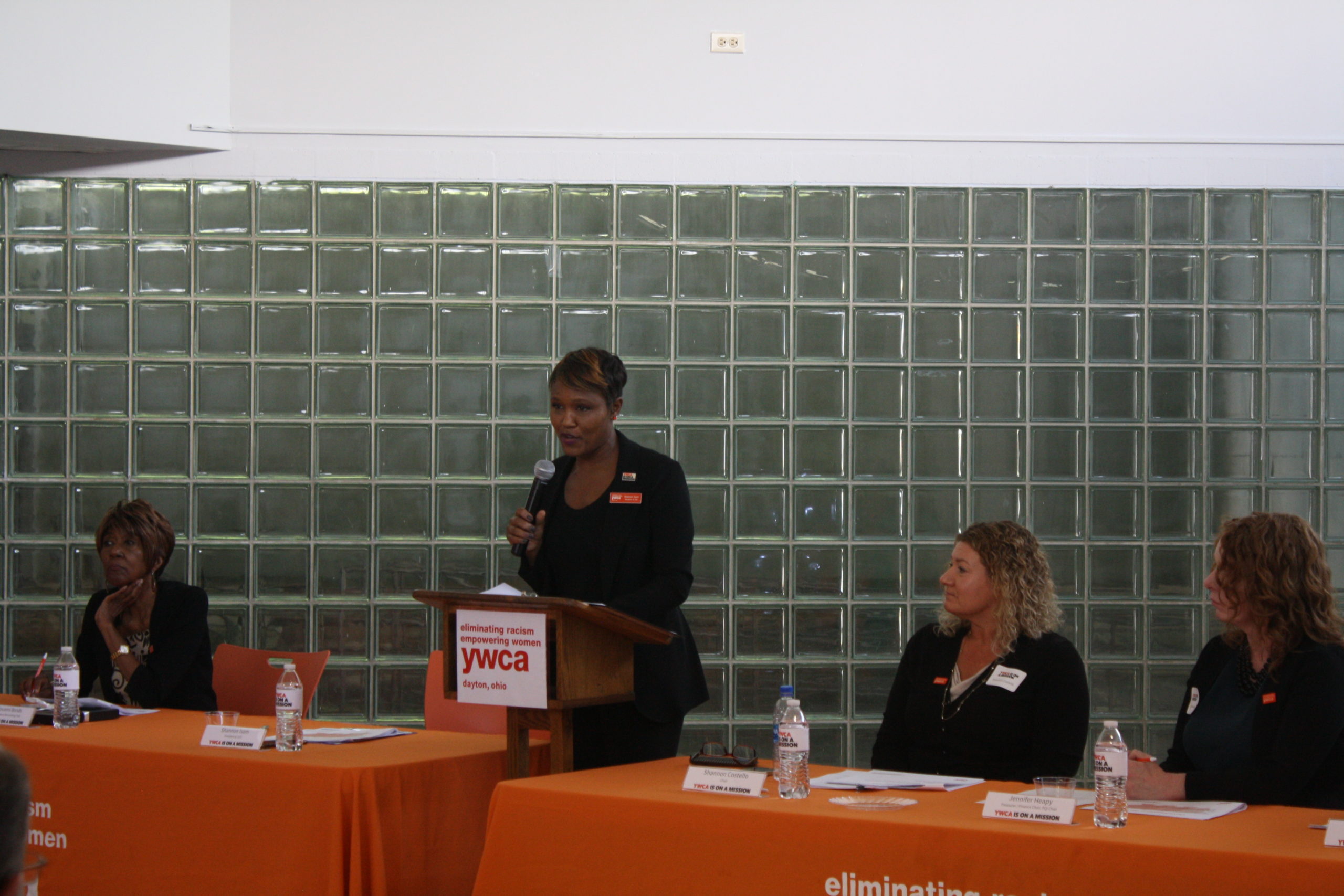 The following remarks were given by President and CEO Shannon Isom at YWCA Dayton’s 152nd Annual Meeting on June 28, 2022.

As with every year, 2021 could not be compared to others. We were hoping we were at the end of COVID and hoping we were at the beginning of our back to normal. We transitioned in 2021, knowing that if we could move through such a trying global test, and after a major election, our democratic transition of leadership, if nothing else, we were entitled to a rest. We hoped.

YWCA Dayton did as you did, we persevered through and with COVID-19, monitoring over 150 clients and residents, across two counties and in three locations. And we did this every single night. We were needed more than ever during this time and in what we may be feeling, for some, as the aftermath, but for others, still in the everyday surge responses. Our walk-in numbers rose, as we, like other first responders, kept our doors open and available 24/7. Likewise, our resolve rose with each and every surge, ensuring that the Huber Heights Campus would be a space for healing, for health, and for hope.

YWCA Dayton’s domestic violence shelter never shut its doors, never decreased our capacity or interrupted our response, in any of our locations. The pandemic was especially treacherous; hotline lethality held steady at triple the rate of before-pandemic times; we saw increased walk-ins, increased fleeing, increased moment by moment needs. Several women walked through these doors, needing safety. We increased our response, or food services, our staff, our dedication, our capacity, and our hope to serve more, better. We extended our services to Huber Heights.

YWCA Dayton advocacy committed to our own level of accountability. We graduated our region’s first-ever women’s leadership cohort centered on leading through philanthropy, and through the lens of racial and gender justice. Eleven women graduated in that inaugural class. We worked collaboratively to seek justice to ensure survivors are Safe At Home, which we saw pass into law. We also continue to advocate for Aisha’s Law, putting numerous safety measures in place to ensure victims of violence will be protected, and unlike Aisha’s two girls, will have their mothers protected from death at the hands of their perpetrators. We have testified, spoke to many representatives and continue to foster relationships, at the statehouse, within this and neighboring counties, in the municipalities and cities we serve. We continued to advocate for equal pay, the closing of the loophole for spousal rape, Racism as a Public Health Crisis, and posed a counter argument for increased access to guns — all of which we failed to see any improvement. We supported women voices and legislature in the general assembly and are continuing to facilitate an annual event that invites all women of the general assembly to attend and acknowledge each other’s collective energy even when we disagree. We lost ground here as well. We still hope.

YWCA Dayton increased programming and our reach. After a competitive process, UpDayton selected YWCA Dayton to partner through acquisition. If you don’t know UpDayton, this organization has been committed to social justice; they have an active lens centered in community building and are an outspoken catalyst which calls community volunteers to “Do Something.” UpDayton believes and lives in the YWCA Dayton mission of eliminating racism and empowering women, and the promotion of peace, justice, freedom, and dignity as an active source, a cornerstone of entrepreneurship, problem-solving, innovation, creativity. In our partnership, we are committed to grow their well-known initiatives like the UpDayton Summit and Project Incubator, focused on creating increased spaces for community problem-solving where diversity both in age and in race are welcomed. In 2023, these annual events will continue as YW programs. We are grateful for UpDayton’s commitment; and for their trust and our reciprocal hope that together we will transform and create.

Over the weekend I listened intently to a graduation speaker; as those of the 2022 class embark on their next, there were a couple of words that not only struck me but, in some ways, resonated, the message was boding. I’m paraphrasing, but the speaker spoke about the lack of hope. Hope is nebulous, amorphous, but in trying to make it tangible, the message conveyed the realization that hope does not serve us in the backdrop of institutions that for many and not for others, the problem. With this, there could not be given a message of hope, maybe especially during a time such as this.

I have thought about this a lot in the last couple of days and tried to fit it, align it, debate it, prove it, disprove it with the many, many areas of disruption the YWCA staff, clients, residents, visitors have experienced and are continuing to experience: in our federal and state laws, in housing, in education, in policing, in policy, in programming… 2021 ended with very little difference than 2020 in terms of the numbers and in all of the increase. YWCA Dayton continued to see:

And with little relief in sight. With an increasing state and culture that manifests power and control, and lack of care, that threatens the livelihood, the voice and now even differences, in our right to be diverse in thought, faith, and even in the right to be free of being scared to die.

The YWCA’s mission is here: We believe that we can and we will eliminate racism. Empower women. We will always promote peace, and freedom and justice and dignity and it is in this mission that we also know that there is, always, always, always, the refreshment and the increase in hope.