HomeOhio House Bill 429 Testimony
A- A A+ 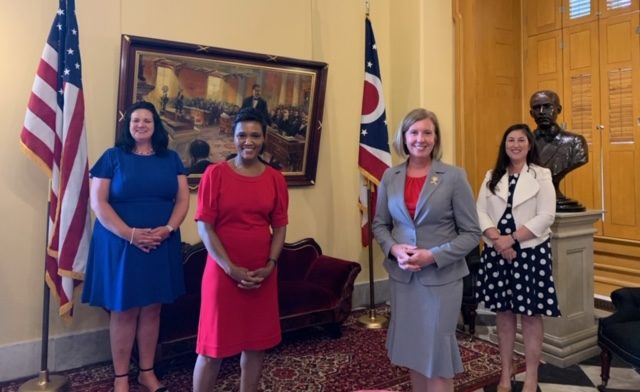 YWCA Dayton President and CEO Shannon Isom delivered the following testimony to the House Civil Justice Committee in support of Ohio House Bill 429 during its hearing on May 27, 2020. HB 429 would improve and expand the Ohio Secretary of State’s Safe at Home address confidentiality program. This program assists victims of domestic violence, stalking, human trafficking, rape, or sexual battery by shielding their personal information from public record and providing them with a safe and secure way to participate in our democratic process. Program participants are assigned a substitute address designated by the Secretary of State’s Office.

Chair Hambley, Vice Chair Patton, Ranking Member Brown, and members of the House Civil Justice Committee, thank you for the opportunity to provide proponent testimony on House Bill (HB) 429, which would improve and expand the Ohio Secretary of State’s Safe at Home address confidentiality program.

My name is Shannon Isom, President and CEO of YWCA Dayton and President of the Ohio Council of YWCAs. YWCA is driven by a mission to eliminate racism and empower women, and prioritizes supporting those women who are survivors of gender-based violence. YWCA Dayton provides 24/7, year-round shelter and supportive services for victims of domestic violence, sexual assault, human trafficking, and other forms of intimate-partner and gender-based violence. In 2019, YWCA Dayton’s domestic violence services sheltered 242 women and children; provided 14,568 nights of stay in shelter; answered 7,263 crisis calls; and provided more than 15,000 hours of advocacy, counseling, and crisis support.

The Safe at Home program currently protects survivors of domestic violence, stalking, human trafficking, or sexual assault and their families by shielding their personal information from public record by assigning program participants with a substitute address designated by the Secretary of State. The substitute address allows survivors to keep their actual residential, school, or work address confidential in public records, including voter registration lists.

As the provider of the only domestic violence shelters and rape crisis center serving Montgomery and Preble Counties, YWCA Dayton has utilized the Safe at Home program as part of our clients’ safety plans since the program was created in 2016. With multiple trained staff members serving as certified application assistants, YWCA Dayton has found this program to be an invaluable tool in allowing women and families impacted by violence to achieve long-term safety and security.

We know that the most dangerous time for a survivor is when they choose to leave their abuser. Approximately 75% of all domestic violence homicides occur when the victim is attempting to leave or after they end the relationship. 66% of female stalking victims were stalked by current or former intimate partners and nearly 90% of female domestic violence murder victims were stalked in the 12 months immediately preceding their murder. When survivors are not afraid that their abuser will be able to access information that would expose their location, they are better able to conduct the activities that allow them to achieve self-sufficiency, and maintain dignity and normalcy by participating in everyday activities like voting.

Sponsored by Representatives Abrams and LaRe, House Bill 429  will build on the current Safe at Home program by expanding the circumstances under which a survivor can maintain confidentiality and enhancing communication between agencies to ensure that  confidentiality is always maintained. HB 429 would provide confidentiality for survivors who own or are purchasing a home and allow for telephone number and address confidentiality for survivors who engage in child custody or child support hearings. This is particularly important, as many survivors must participate in these proceedings with the individual who abused them. HB 429 would also eliminate the requirement that an applicant change residence in order to be eligible for the program. Finally, this bill would require the Secretary of State to forward any periodical subscriptions to a survivor’s actual address, allowing them the same access as anyone else receiving mail.

In alignment with our mission, YWCA Dayton thus requests that you support the passage of House Bill 429 in support of our organization’s service population and survivors of gender-based violence throughout the state. I would be happy to answer any questions you may have.