HomeOhio House Bill 3 Testimony
A- A A+ 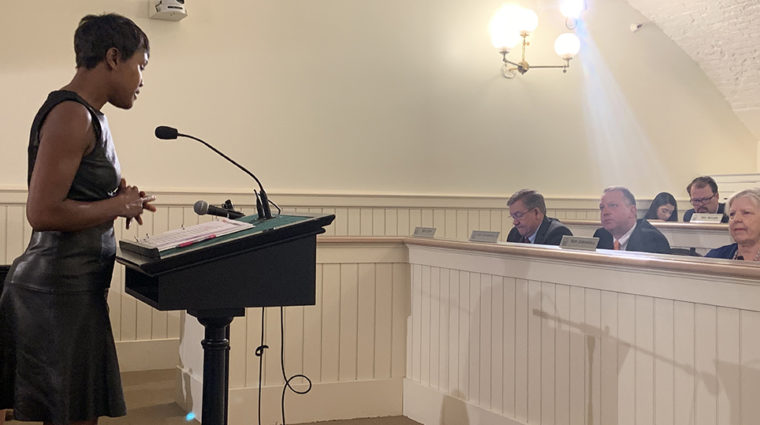 YWCA Dayton President and CEO Shannon Isom delivered the following testimony to the House Criminal Justice Committee in support of Ohio House Bill 3 during its hearing on June 13, 2019. HB 3 would protect victims of domestic violence by assessing their levels of danger, connecting them with resources such as rehab and housing, and prohibiting offenders from pleading down violent felonies to lesser charges if previously convicted for a violent felony. It is named after Aisha Fraser, the former wife of ex-judge and ex-lawmaker Lance Mason, who is accused of stabbing her to death in Shaker Heights, Ohio, in November 2018. Fraser’s fiance, Ronald Williams, said if protections such as those found in HB 3 would have been law a few years ago when Mason previously assaulted her, Fraser may be alive today.

Update 05/20/20: The Ohio House voted 94-0 in favor of Aisha’s Law and it was then introduced in the Senate. On Dec. 2, 2020, the Ohio Council of YWCAs again testified in support of HB 3 to the Judiciary Committee.

Chair Lang, Vice Chair Plummer, Ranking Member Leland, and members of the House Criminal Justice Committee, thank you for the opportunity to provide proponent testimony on House Bill 3 (Aisha’s Law), which would increase protections for domestic violence survivors across the state.

Sponsored by Representatives Boyd and Carruthers, Aisha’s Law will prevent intimate-partner-violence-related homicide by providing a means for police and domestic violence advocates to assess a survivor’s level of danger for future intimate partner violence following an incident, and refer survivors to resources such as crisis intervention and counseling, housing, and medical and legal support. The bill would also hold perpetrators accountable by prohibiting offenders from pleading down violent felonies to lesser charges if previously convicted for a violent felony.

A 2017 report from the CDC found that more than half of female homicide victims were killed in connection to intimate-partner violence — and in 10 percent of those cases, violence shortly before the killing might have provided an opportunity for intervention.

When previous incidents of domestic violence exist, the risk of homicide is 20 times higher. The report found that approximately one in 10 victims of intimate-partner violence-related homicide experienced some form of violence in the month before their death.

A study conducted by The Washington Post of five major U.S. cities found that more than 1/3 of all men who killed a current or former intimate partner were publicly known to be a potential threat to their loved one ahead of the attack. 36 percent of the perpetrators in the study had a previous restraining order against them or had previously been convicted of domestic abuse or a violent crime.

As the provider of the only domestic violence shelters in Montgomery and Preble counties, YWCA Dayton is driven by a mission to eliminate racism and empower women, and prioritizes supporting those women who are survivors of gender-based violence. YWCA Dayton provides 24/7, year-round shelter and supportive services for victims of domestic violence, sexual assault, human trafficking, and other forms of intimate-partner and gender-based violence. In 2018, YWCA Dayton provided more than 12,000 nights of shelter to 200 women and children.

Working on the front lines with survivors of domestic violence, our shelter staff believes that the passage of Aisha’s Law would be a life-saving measure for survivors. By implementing a lethality assessment similar to the one currently used in YW’s shelters, the law would provide first responders with better information about the cycle of abuse and what resources they can provide to end the cycle. Amanda Chalmers, one of the YW’s Shelter Navigators, said that “If every entity providing services has the same information about a survivor’s situation, survivors will be more comfortable interacting with law enforcement and we will experience better outcomes.”

In alignment with our mission, YWCA Dayton thus requests that you support the passage of House Bill 3 in support of our organization’s service population and domestic violence survivors throughout the Dayton community.