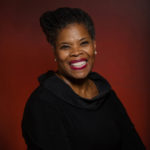 Rev. Vanessa Oliver Ward has been a trailblazer – for women, for ministry, for community. Retired as co-pastor of Omega Baptist Church and founder/past chair of the Board of the Omega School of Excellence, she currently serves as president of the Omega Community Development Corporation, a nonprofit organization focused on youth and family development, the economy, and access to employment and businesses.

She is a partner, with her husband, Rev. Daryl Ward, in the success of the Omega Baptist Church, which partnered with the Dayton Metropolitan Housing Authority and the City of Dayton to deliver Dayton’s first Hope VI Project. Rev. Ward played an integral role in the growth of the church from 150 members to more than 4,000. Additionally, Rev. Ward was responsible for the innovative religious education curriculum at the church.

Rev. Ward was tireless in her dedication to the Omega School of Excellence, designed to grow middle schoolers into leaders. She modeled the school on the Knowledge is Power Program, known for its intensity. Prior to beginning the school, Rev. Ward served as director of the Character Academy, a free afterschool program. She served as vice-president, director of curriculum development for Urban Outreach Foundation, a national organization for continuing education of urban church leaders, and has served as a member of the American Baptist Churches/Ohio Regional Board of Trustees.

In 2005, the Omega Baptist Church purchased a 30-acre campus (formerly United Theological Seminary) and envisioned building a community center that housed needed services, a senior living facility, outdoor recreation, and a worship center to serve as an anchor of hope and revitalization to empower children and their families. Thanks to Rev. Ward’s activism and drive, two facilities have been constructed and are now operational: the Omega Senior Lofts – an 81-unit apartment community of affordable housing for seniors; and the Hope Center for Families – a community center that houses a Dayton Children’s pediatric clinic, Sinclair College adult education, and Mini University early learning program.

Under Rev. Ward’s leadership, Omega CDC has partnered with Dayton Public Schools on their Neighborhood School Centers and is growing its Scholars of Hope After School program at Fairview Pre-6 and Edwin Joel Brown Middle Schools, providing 75 students with two hours of math or reading instruction a day, as well as enrichment activities such as chess, martial arts, and music, and a hot meal supplied by the Dayton Cooks program.

Rev. Ward has provided support in the development of a breast cancer survivors support group for African American women, and has served on Boards ranging from the Dayton Contemporary Dance Company to the Dayton Foundation Board Committee on Grants and Programs and OneFifteen, DECA, 2-Generation Advisory, Learn to Earn Dayton, and The Dayton Chapter of the Links, Inc. She also serves as a lecturer at United Theological Seminary and is a contributing writer in the book Journey to the Well, a student and leader workbook co-authored with Bishop Vashti McKenzie.

A Columbus native, Vanessa attended Johns Hopkins School of Advanced International Studies and is a graduate of The College of Wooster, United Theological Seminary, and in 2012 she received the Master of Philosophy in Hebraic and Cognate Studies (M.Phil.) at the Hebrew Union College in Cincinnati, Ohio, focusing on II Temple history, language and culture. Rev. Ward was ordained as a minister of the Gospel on November 12, 1998, by The Omega Baptist Church. She is sought locally and nationally to speak at churches and conferences.