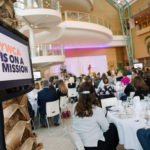 Each October, YWCA Dayton recognizes the strength and resilience of domestic violence survivors at a special fundraising event to support YWCA Dayton’s domestic violence shelter and support services, including its 24-hour crisis hotline. Formerly called the YWomen Breakfast, it was refreshed (and expanded!) in 2019 as Voices Against Violence to better reflect the platform it provides for both survivors and supporters to be a voice for change.

This event also historically features the recognition of our annual Marsha Froelich Survivor Award, which honors women who embody Froelich’s spirit of survivorship and resilience and give graciously to others. The late Marsha Froelich, a former development director at YWCA Dayton, was a fearless leader who advocated — at work and in her spare time — for the under-served, the women of the YW, and those within the community who did not have a voice. This award recognizes a woman whose words and actions serve to exemplify, inspire, set an example, and celebrate the spirit of a survivor who has overcome the odds and continued on an amazing journey, personally or professionally.

1 in 4 women will experience domestic violence in her lifetime. We ensure women and children fleeing abuse receive critical services, including emergency shelter, food, clothing, and support from case managers who empower them to heal and break the cycle of domestic violence.

99% of abusive relationships involve financial abuse. In fact, it’s the number one reason victims are unable to leave an abusive partner, or have to return to one. YWCA Dayton staff and volunteers are trained to provide financial literacy information and resources, including the Allstate Moving Forward curriculum, to ensure survivor’s long-term stability and self-sufficiency.

Nearly 50% of domestic violence victims have delayed leaving their abuser out of fear of harm to their animals. YWCA Dayton works with local animal partners (including SICSA, the Humane Society of Greater Dayton, and local veterinarians) to provide concurrent pet shelter while survivors are in our domestic violence shelters, ensuring the whole family can heal.

Females between the ages of 16 and 24 are roughly 3 times more likely than the rest of the population to be abused by an intimate partner.  YWCA Dayton has a robust slate of youth programming, including Girls LEAD! and AMEND Together, that works in our rural schools to ensure teens have the tools they need to build healthy relationships and experience violence-free futures.

RETURN TO VOICES AGAINST VIOLENCE PAGE