Until It Is Eliminated: A Campaign to Sustain Racial Justice

HomeHow To HelpUntil It Is Eliminated: A Campaign to Sustain Racial Justice
A- A A+ 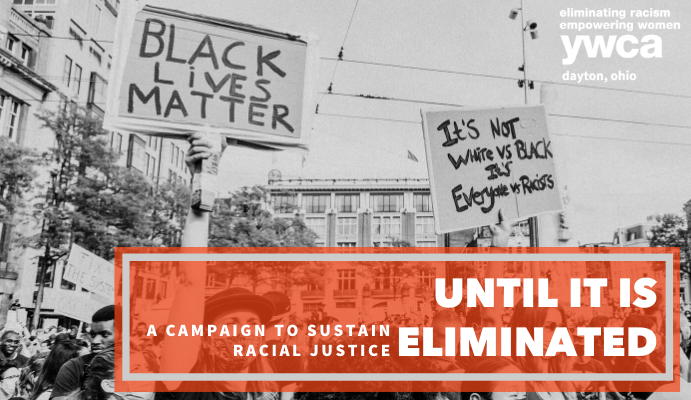 Racial injustices have to end.

Racism has to be eliminated right now.

This summer, we delivered proponent testimony for S.C.R. 14, which would declare racism a public health crisis in the State of Ohio. Ohio would be the first state to declare racial inequities have to be eliminated.

Until it is eliminated…

Only about 9% of grant-making from foundations is dedicated to communities of color. In the same vein, 2% of YWCA Dayton’s operating budget funds advocacy and racial justice efforts; our platform has been built on grit, resiliency, and committing to doing more with less, knowing that one day, we would be in our shared right now. In the last year alone, we’ve:

We are here in our right now. We invite the advocates, supporters, disrupters, thinkers, protesters, activators, change agents, change makers, dreamers, visionaries, those that are angry, sad, exhausted, tired, refreshed, renewed — the hopeful — to join us in doing more.

Our goals are simple. With your $10 a month gift, we commit to:

We commit and will continue to do more…Until racism is eliminated.