HomeEmpowering women, strengthening community
A- A A+ 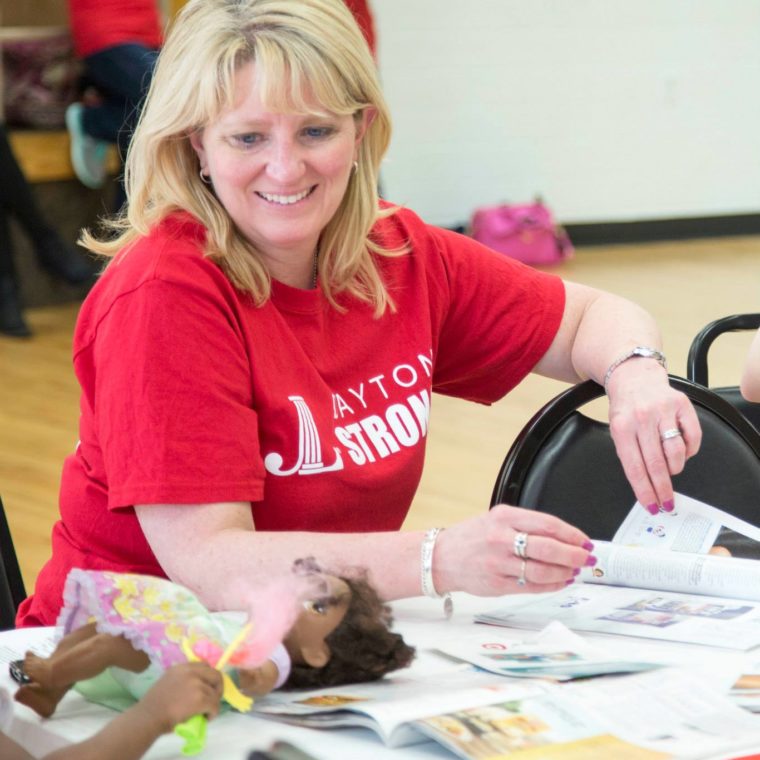 When the COVID-19 pandemic hit, the more than 700 volunteers who YWCA Dayton relies on each year were faced with a choice: to pause, or to pivot.

For seasoned volunteer groups like the Junior League of Dayton, it was a challenge worth embracing. Instead of hosting their annual summer literacy program at the local library, they recorded regular virtual story times that could be viewed from the safety of home.

Despite the challenges, plans to expand the League’s signature Learn Grow Explore literacy program to YWCA continued, with the first cohort of family literacy sessions launching in September 2020. Customized for families living in transitional environments, the curriculum is based on one that the League has presented annually since 2015 through Dayton Metro Library to combat “summer slide” and ensure local youth have safe, healthy summertime meal and activity options.

Kelly Kempton, chair of the League committee charged with building the program’s framework, noted: “The Junior League of Dayton has always had a significant impact on the landscape and welfare of the Dayton community, and we continue to honor that tradition by serving the best interests of the future of our community: its children.”

The LGE Family Literacy Night at YWCA is a quarterly event, held each Thursday for a month, that includes child-centered programming, and aims to eventually feature financial and traditional literacy training for adults. All League volunteers receive trauma-informed care training from YW staff in advance of program sessions.

“They didn’t blink; it wasn’t about what they couldn’t do, it was always about, ‘What can we do now?’,” said Destinye Arnold, children’s program manager at YWCA Dayton.

Junior League and YWCA have a long history of partnership and represent two of the Miami Valley’s oldest organizations dedicated to empowering women, with both celebrating milestone anniversaries in 2020 (100 and 150 years, respectively).

Alongside YWCA’s, Junior Leagues have worked on the forefront of preventing violence against women by educating the public, operating transitional housing, providing counseling to survivors, and advocating for the passage of the Family Violence Prevention and Services Act (FVPSA), the first federal legislation to address domestic violence.

In Dayton, the Junior League has provided more funds and more volunteer womanpower for domestic violence services than any other cause in its century-long history. From coordinating Silent Witness awareness exhibits in the 1990s to founding YW’s Hope’s Closet onsite thrift shop in 2003, the impact of Junior League volunteers remains evident.

It’s also fitting that Junior League members were the last volunteer group to serve YW onsite prior to pandemic safety guidelines taking effect, helping with final preparations for Women of Influence 2020. YWCA named Junior League its Women of Influence Lifetime Achievement Honoree in 2002, making it one of only four organizations to ever receive the award.

Noted Arnold: “We can’t wait to have the League back onsite, but in the meantime, they’ve consistently made our children in shelter feel cared for and know that someone is thinking of them.”

Interested in volunteering with YWCA Dayton? Opportunities are always available on one-time and recurring schedules for groups, individuals, families, and more. Visit www.ywcadayton.org/volunteer to get involved now.