HomeClothesline Project holds space for victims of violence
A- A A+ 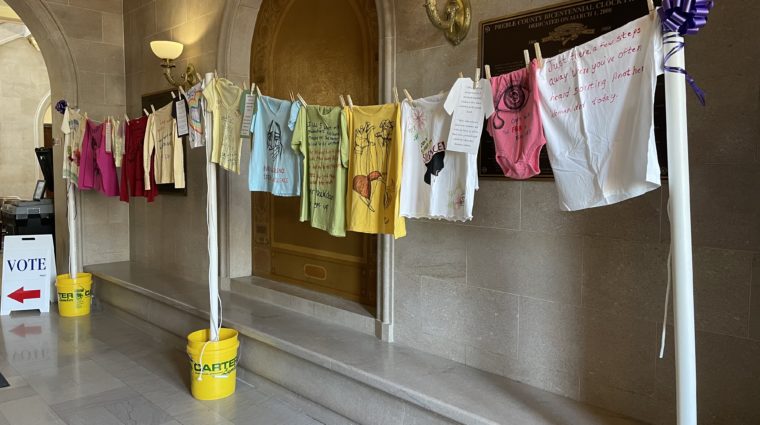 Among the yellows, the whites, and the blues, the shirts displayed in YWCA Dayton’s Clothesline Project that stand out the most every year aren’t noticed because of their hue – but because of their size.

“When we put them up or take them down, we’ll have people stop and ask what it is for, and say how it’s very impactful, especially the baby onesies that say ‘Don’t hurt mommy,’” said Courtney Griffith, director of rural strategy.

Following a pause in 2020 due to COVID-19, YW’s Preble County Office returned to the county courthouse this year to install the exhibit, an annual event for more than a decade. It is part of a national movement – originated in Hyannis, Mass., in 1990 – that serves to raise awareness of assault and abuse through a visual display of violence statistics that are often hidden behind closed doors.

Each shirt is made by a survivor of violence or by someone who has lost a loved one to violence, and the color of each shirt represents a different type of violence. Shirts displayed in Preble County have all been created by current or former YWCA Dayton domestic violence shelter clients.

“I love that this project uses something as simple as a piece of clothing to represent survivors in such a powerful way. A T-shirt is something that everyone has, so it reminds us that domestic violence and sexual assault can happen to anyone,” said Miranda Armstead, rural advocate.

“It is a great visual to represent the differences and similarities in survivor experiences. You can look at our clothesline and see everything from a beautifully drawn design representing how a survivor felt during or after they experienced trauma, to a simple message about supporting survivors and stopping the cycle, or a colorful heart drawn by a child who just simply wants to ‘stop DV.’”

The exhibit is displayed in April in recognition of National Crime Victims’ Rights Week, from April 18 to April 24, 2021. Client pieces have varied; some of the most moving included a series of five completed by a mother and her children who had recently immigrated to the U.S., and another that included a short story about childhood abuse.

“My hope is that seeing the Clothesline Project in the courthouse is a way for people to start having conversations about domestic violence and sexual assault and what they can do to support survivors,” Armstead said.

Added Griffith: “I hope people take away the impact that intimate-partner violence has on victims and their children, and the courage and strength that they have as survivors. Victims have a voice, and this project shows the community the messages they want to share.”