HomeAnnouncing the 2019 Marsha Froelich Survivor Award honoree
A- A A+ 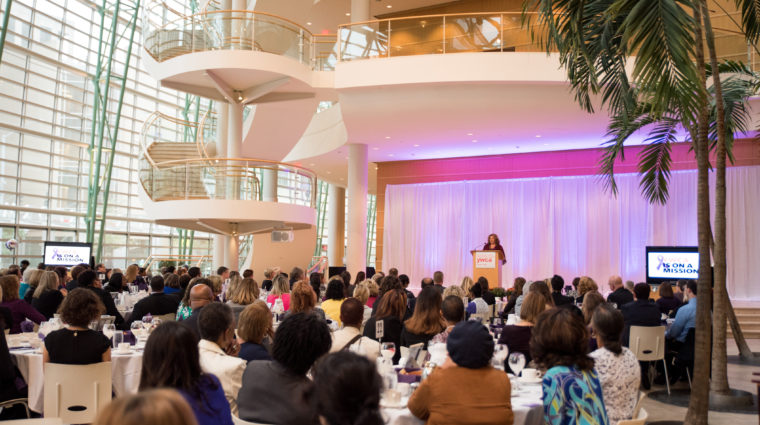 YWCA Dayton will honor Dayton native Beth Stelling with its Marsha Froelich Survivor Award at its 17th annual Domestic Violence Awareness Month event on Thursday, Oct. 10, 2019, at the Schuster Center Wintergarden. Formerly called the YWomen Breakfast, it has been refreshed (and doubled) as the Voices Against Violence Breakfast and the Voices Against Violence Luncheon to better reflect the platform it provides for both survivors and supporters to be a voice for change. Breakfast is 7:30-9 a.m.; the luncheon is 11:30 a.m.-1 p.m.

This year’s keynote speaker is Shan Foster, vice president of external affairs & AMEND Together at YWCA Nashville and Middle Tennessee. AMEND Together is an initiative that recruits, educates, and equips men and boys to serve as advocates for violence prevention and cultural change; YWCA Dayton has been selected as one of five YWCA affiliate sites in the U.S. to implement AMEND Together. Foster graduated from Vanderbilt University, where he was named SEC Men’s Basketball Player of the Year, finished as the all-time leading scorer in school history, and was drafted into the NBA by the Dallas Mavericks in 2008. He was inducted into the Tennessee Sports Hall of Fame in 2009 and Vanderbilt Athletics Hall of Fame in 2010.

The Marsha Froelich Survivor Award, now in its eighth year, honors women who embody Froelich’s spirit of survivorship, resilience, and generosity. The late Marsha Froelich, who died in 2011, served as vice president of development at YWCA Dayton from 2000-2006.

“We knew her as a fearless leader who advocated — at work and in life — for the underserved, the women of YW, and those within the community who did not have a voice,” explains Shannon Isom, YWCA Dayton president and CEO. “This award recognizes a woman whose words and actions serve to exemplify, inspire, set an example, and celebrate the spirit of a survivor who has overcome the odds and continued on an amazing journey.”

An accomplished writer and comedian with two stand-up albums to her name, this year’s recipient, Beth Stelling, was named “Best Stand-up Comedian in Chicago” by The Chicago Reader and has appeared on “CONAN,” “Jimmy Kimmel Live,” “Chelsea Lately,” and her latest stand-up special is part of “The Standups” on Netflix. She has written for “I Love You America” with Sarah Silverman on Hulu, Judd Apatow’s HBO series “Crashing,” and the 2019 feature film Good Boys, which was just nominated for a People’s Choice Award as The Comedy Movie of 2019. She is a graduate of Oakwood High School and Miami University.

Stelling has used her public platform to give voice to survivors’ realities. In 2015, she spoke out as a survivor of domestic violence on her own social media and incorporated her experience into her stand-up routine. “There are many reasons not to make an abusive relationship public, mostly fear. But since talking about this onstage, many women have come to me after shows asking me to keep doing it and men have shown their solidarity,” she said. While she’s moved on from that material in her act, she continues to use her voice in comedy to shine light on the female experience and perspective.

Says family friend Ellen Ireland: “Beth has always been courageous, bold and resilient. She is a constant advocate for women in the most creative and imaginative ways, and she is such a deserving recipient of this award.”

Many thanks to our event sponsors: CareSource, Greater Dayton Area Hospital Association, Furst The Florist & Greenhouses, Knack Creative, Omnicom Solutions, and Riegel Financial. Free to attend, with monetary donations accepted at the event. Registration is open at www.ywcadayton.org/vav.